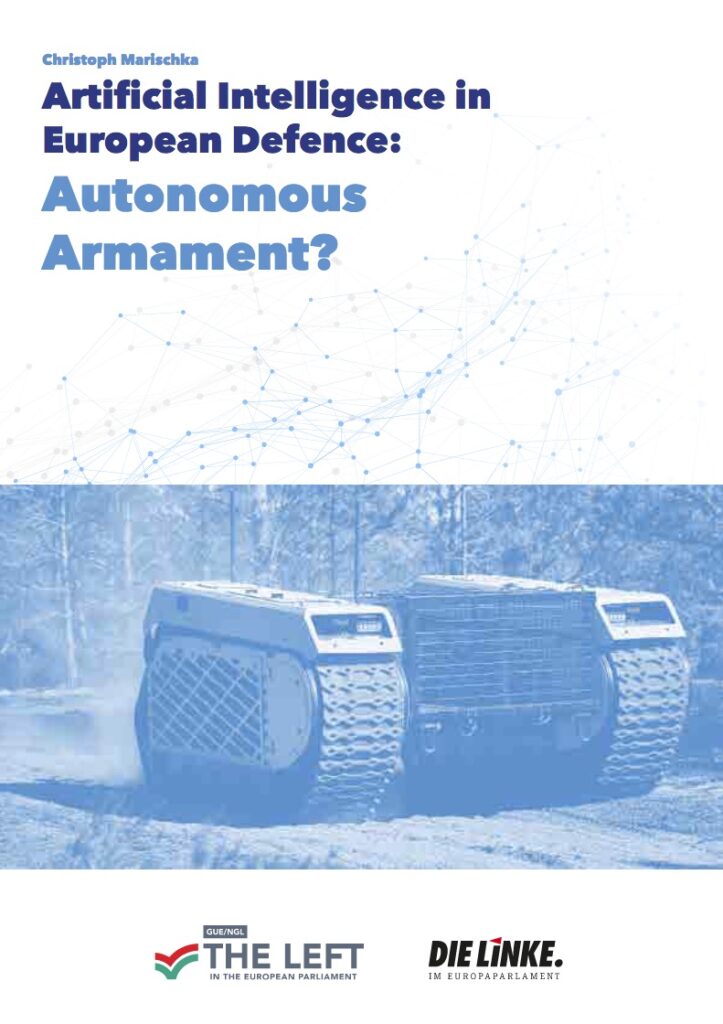 High-flying pseudo-satellites that monitor extensive areas for months; swarms of drones that secure the vicinity of field camps and „critical infrastructure“; computer systems that suggest targets to people and calculate the optimum line of fire; chat bots that are designed to get young people interested in military service and conceal the actual situation on distant battlefields; automated military logistics and (armaments) production: many of the current armament programmes of the European Union and its member states are related to artificial intelligence in one way or another.
The ongoing armament of the European Union, driven by digitalisation and artificial intelligence (AI), poses a threat to the populations of Europe. The COVID-19 pandemic has demonstrated that the money being poured into the armaments industry is urgently needed, for instance, in the care and health sectors. Furthermore, this specific form of armament not only has the potential to generate entirely new forms of surveillance and propaganda within Europe, but it also fuels a military escalation of latent conflicts among and with major powers and makes it more likely. While expectations of a „super AI“ seem to be hype more than anything, propagated by industry and (venture) capital to mobilise public funds for their profits, AI applications are still finding their way into military systems and planning at all levels in the course of the current armament spiral.
There may not be a sudden, but certainly a creeping loss of control. After all, the current armament spiral not only involves the development of swarms of drones and killer robots, but it also threatens to do away with familiar distinctions between war and peace, civilians and combatants, and to completely lift the boundaries of the battlefield – as is already the case in cyber warfare. A study by RAND Cooperation, for example, which was commissioned by the European Defence Agency and included in the 2018 EU armament catalogue (2018 Capability Development Plan), predicts that international law will be almost entirely irrelevant after 2035.
In it, national and international regulations primarily appear as obstacles to the realisation of technological possibilities. Instead of participating in this misguided arms race, it would be desirable for the security of us all if the EU were to devote its full energy to the regulation of autonomous weapons systems, cyber warfare and propaganda. In order to live in peace, we need a sharp demarcation of peace from war, which must be outlawed instead of anticipating and preparing for it at all levels, from transport and research policy to the circuit boards in our mobile phone networks. The „Cyber peace“ and „Stop Killer Robots“ campaigns provide important and feasible impulses in this regard. Unlike the armaments industry, however, they are not subsidised by the EU Commission with hundreds of millions of euros each year. Instead, the Commission has specifically promoted cooperation between civil universities and the armaments industry for many years. There is also resistance to this which starts at the right point: how much money is invested in solving social problems, and how much in the disastrous, accelerated and largely uncontrolled armament of the military apparatus?